Wounds among elderly are one of the biggest and most costly health issues. The patient’s immune system is responsible for closing wounds, and macrophages of the innate immune system orchestrate the entire healing process. When healing becomes problematic, macrophages are often dysfunctional. Macrophage functionality can be restored by soluble beta-glucan activation.

Why use SBG in Wound care? 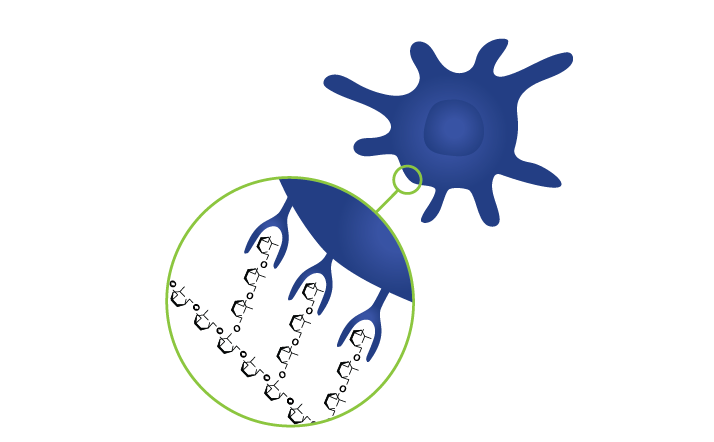 The central role macrophages play in wound healing includes a variety of functions, from removing dead cells and pathogens, to promoting tissue restoration. Macrophages are central to regulating the phases of wound healing, and play a part in the haemostasis, inflammation, proliferation and remodelling phases, making them attractive targets for management of slow healing wounds. Macrophages are coordinating the healing process and orchestrate the overall phases. Pre-clinical studies show a detrimental effect when macrophages are ablated before or during wounding [1-3]. Also, when wound healing derails the root cause are often poor macrophage functionality [4, 5]. With increasing age the macrophage displays age related alteration in its function (senescence), there is reduced proliferation of both the fibroblast and the epithelial cells, a reduced number of cells responding to growth factors, cytokines and angiogenesis stimulation and there is also a potential for arterial insufficiency and altered microcirculation.  In a person with Diabetes the macrophage is sluggish in its function with a decrease in the release of growth factors and neurotransmitters, cellular senescence occurs. There is also evidence that suggests deleterious synergetic effects of the combination of age and diabetes in wound healing. The consequences of poor macrophage function includes a chronic low grade inflammation with imbalance between matrix metalloproteinases and their inhibitors, a lack of growth factors due to their destruction by the MMP’s and there is also destruction of the extracellular matrix and the presence of senescent or premature aged cells in the wound bed.

Most clinicians know that wounds which do not heal, normally stalls in the inflammatory phase. Macrophages play a key role in regulating and ultimately resolving the inflammatory response. As macrophages function at an overall level and thus can correct multiple imbalanced factors, they have been suggested as attractive targets in therapeutic use [6-8].

One such therapy activates the macrophages through beta-glucan stimulation. Beta-glucans have been used medically in the Far East for more than 2000 years. They’ve been recognized in the Western medicine the last century based on their ability to modulate the innate immune system, particularly through the action on white blood cells. In a wound context, binding of beta-glucan activates the macrophages, resulting in increased phagocytic abilities and production of specific signal molecules and growth factors regulating the inflammatory response and transition to the proliferative phase [9, 10].  By applying beta-glucans to stalled wounds the healing process is re-started and as the macrophage functions are boosted the chances for wound closure is increased.

Beta-Glucan Gel. Woulgan contains SBG as an ancillary medicinal component. It was CE approved as a medical device class III in 2014 and has extensively clinical documentation. The SBG component is shown to be able to activate macrophage functions in preclinical models (Skjæveland & Engstad Sår 2013) and the products efficiency is further documented through several clinical studies (Zykova 2014, Hunt  2018, håland et al 2018, King 2017 etc).

Woulgan is an active therapy that activates slowed healing and accelerates the healing process by targeting the macrophages through the SBG ingredient. Woulgan is indicated for both acute and chronic wounds where wound healing is slow, or is anticipated to heal slower than normal or is at high risk of becoming stalled in

Woulgan has a strong cost-benefit ratio and the positive health economic calculations are demonstrated in several publications (Cutting 2017 JWC, Elg &Postnett 2019 accepted in JWC)as well as being accepted in national reimbursement systems in the UK and Germany.

Want to know more about Woulgan?

You can read more about Woulgans mode of action, clinical documentation, user guidance and wound care in general at the Woulgan homepage.